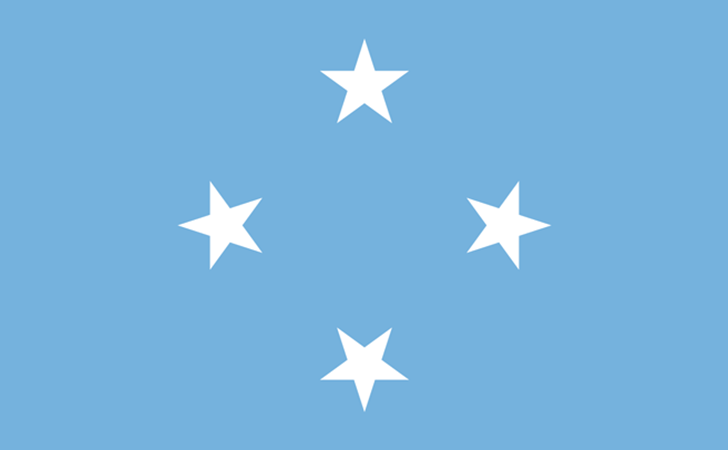 The flag of the Federated States of Micronesia (FSM) was accepted on 30 November 1978. The blue field signifies the Pacific Ocean, while the four stars indicate the states in the federation: Chuuk, Pohnpei, Kosrae and Yap. Micronesia Flag alike design with six stars was in usage from 1965 for the flag of the Trust Territory of the Pacific Isles.

Kosrae was then share of Pohnpei so both were signified by one star. The three extra stars on behalf of Palau, the Marshall Islands and North Mariana, which selected not to contribute in the Federation. The flag of Micronesia, approved in 1978, is in the colors of the UN flag. The light blue also characterizes the Pacific Ocean. In an echo of U.S. heraldic exercise, the stars epitomize the entities that structure the state, in this case, the four federated states, decided like the points of the compass, though the states sites are actually dispersed from west to east

On October 24, 1962, United Nations Day, a flag was first raised for the Trust Territory of the Pacific Islands (TTPI), which, below United Nations direction, was being managed by the United States. The colors of that flag, light blue and white were built on those of the United Nations flag. Planned by Gonzalo Santos, the flag established final agreement in 1965 built on a vote in the National Congress of Micronesia.

The six white stars in the Trust Territory flag agreed to the six districts of the republic. The three latter island collections developed the Federated States of Micronesia in 1979, composed with the additional district of Kusaie. The new Micronesian flag was created and approved by an interim congress on November 30, 1978. Built on the design and representation of the flag before used by the Trust Territory, this flag presented four five-pointed white stars for the four districts (states), focused on a blue field for the Pacific Ocean. One ray of each star pointed away from the midpoint of the flag, as if decided on a make-believe ring. Free overtone with the United States was attained on November 3, 1986, and later a slight alteration in the flag was made: dark blue was relieved for the of the original TTPI flag.

Lying in the European continent, Oceania has over 600 isles with approximately 0.01 million inhabitants. With the population density of 169 per Km2 (438 people per mi2), the Micronesia territory spreads across 2, 600, 000 km².

Micronesia is a federal state government with the capital city being Palikir that exceeds the population of about 5000.

Being a federal republic, Micronesia comprises of four states.